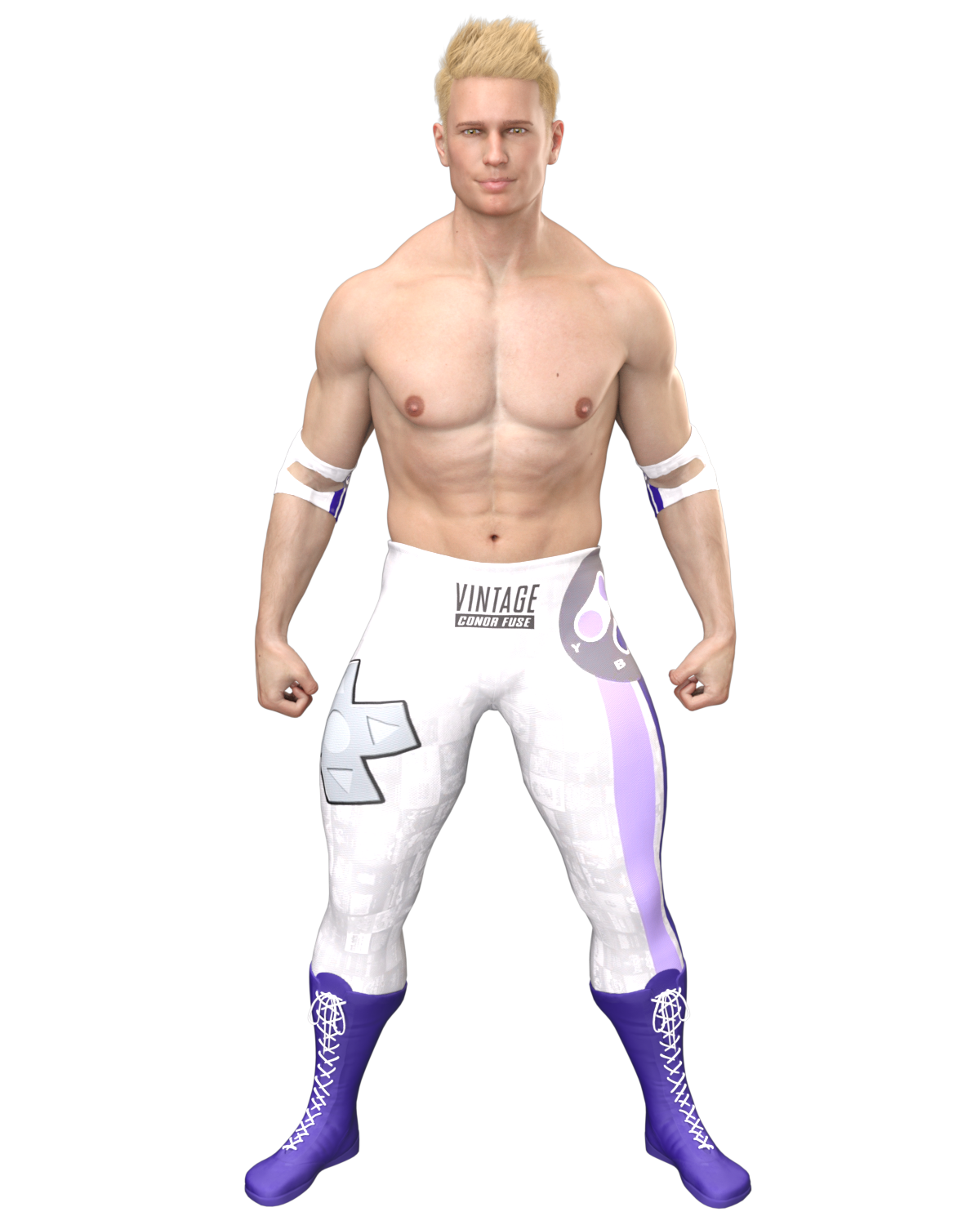 “The Vintage” Conor Fuse got his start in wrestling alongside his older brother, Tyler, as The Fuse Bros. in the fWo and DEFIANCE Wrestling. Now, off on his own for the very first time, he looks to make a name for himself in a one-player, singles campaign for the ages. Enter: High Octane Wrestling.

Conor is convinced the whole world (and the wrestling industry in particular) is a video game. Is he wrong? You spend your whole life leveling up, gaining new abilities and progressing through each life stage, with the ultimate goal of becoming triumphant, winning a trophy or being recognized as the best in your field. But there are road blocks along the way. Henchmen follow your every move. There are cryptic messages everywhere. And if you’re lucky, you’ll only run into one or two bosses who are hell bent on not letting you achieve the next step on your path to success. Tell him wrestling is no different.

Outside of the “game” tendencies in dialog and belief, Conor still has a mean-streak in the ring and he will take his wins and losses very seriously. This is truly not a game to him, it’s a way of life.

Conor Fuse is here. He is ready. And he would like to play.

-Basic information: Conor is left handed. He will usually try to wrestle at a fast pace.

-In terms of Conor’s “manager”, The Game Boy is not opposed to cheating if the opportunity presents itself and Conor is playing the HEEL. TGB is 6’6″, 300+ lbs. He’s a big, mindless, mute dummy who is very powerful. He will normally remain quiet on the outside and not do much unless there’s a need in the story for him to be involved (eg. high stakes, tension, etc). If Conor is a FACE, you can keep The Mini Boss out of his matches altogether.

-Despite the silly demeanor at times, Conor is very smart, well-spoken and has a strong work ethic. He’s done his homework on whomever he’s in the ring with, even if he doesn’t get the victory. So, feel free for him to really work on an opponent’s weakness, even if that means grounding his attack and slowing the match pace down. Additionally, any comedy or over-the-top “fun” is usually left for segments or role plays.

-Emotions can become a problem. Not in terms of being distracted or arguing with a referee but just having too much energy/passion/desperation (whatever you need to tell the match story) in the ring and leading him into mistakes. In a video game analogy, think of playing a harder level but not having the real patience to play through it correctly and losing lives in the process.

"Bloody Tears (Epic Version)" from Castlevania II begins. A purple mist floods the entrance way as "The Vintage" Conor Fuse emerges from behind the apron 23-seconds into the theme. He stands at the top of the rampway, head down, sporting a dark purple jacket with its high-collar raised. The jacket is open, showing his vintage SNES tights as he slowly raises his head. The fog continues to pump from the stage as Fuse methodically makes his way down the ramp. The crowd starts a "!RANK" chant, pointing in Conor's direction as he marches towards ringside. Once in front of the squared circle, The Vintage leaps onto the apron and then with ease clears the ropes by jumping over them and somersaulting into the middle of the ring. Fuse tilts his head back and zen cries into the rafters while the fans in attendance continue to cheer him on. Conor removes his trench coat, revealing his trademarked light purple arm sleeve on his left arm. Fuse waits in his corner.

A MAJOR TEST OF STRENGTH

A LINK BETWEEN WORLDS

IN RESPONSE TO CHRISTOPHER AMERICA…