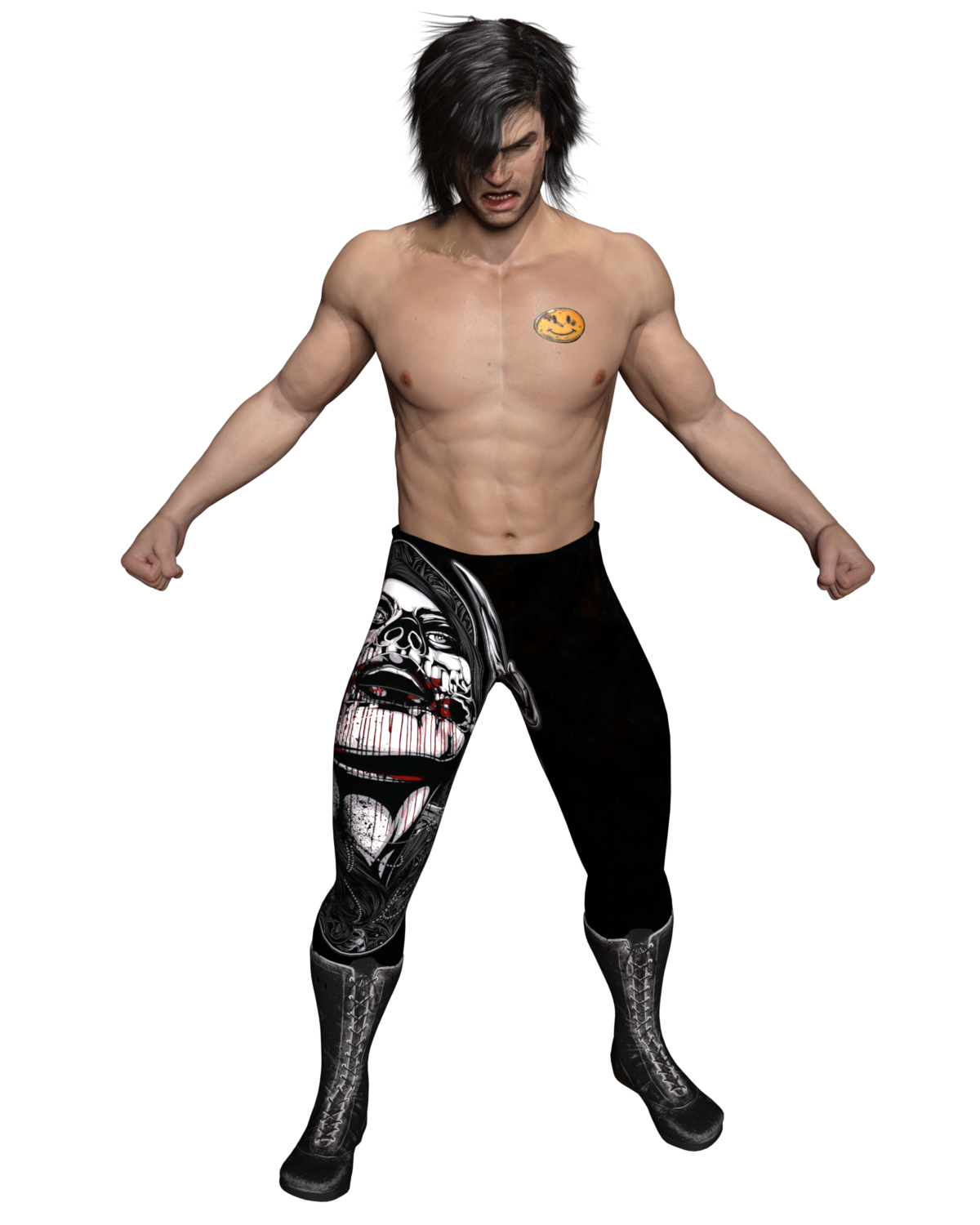 Hometown From Under The Midnight Sun, Alaska

Theme Music "In Spirit In Spite" by Absent In Body

History
“The Provocateur” Arthur Pleasant spent the majority of his childhood in a small Alaskan town called Utqiaġvik (pronounced Oot-key-ag-vik”), where the sun does not set for approximately a full month. What growing up in this environment did to Arthur Pleasant’s psyche is relatively unknown, but rumor has it that Arthur spent a significant amount of time in various institutions and regularly seeks therapy (Update 1: This has been confirmed!). Before the age of 21, Arthur’s history is very much unknown. All we know for sure is that, based on official documents for identification purposes, Arthur Pleasant was born on July 12th, 1993. He was also trained by a Hall of Fame competitor who has traveled the globe for the past 25 years, but the actual identity of this individual has been redacted from all viable documents containing such information. With the charisma of a cult-leader, Arthur has found himself leading various groups across the professional wrestling landscape. Among them was a group of known criminals who had been blackballed from wrestling in the United States known as “The Collective”. In the deep south, Arthur is the Boss of another group of violent eccentrics known as “The Scourge”.

Arthur Pleasant once employed the services of a seven-foot gargantuan named Yuri Reznikov, who had ties to the Russian Bratva. Upon failing to bring home the HOW World Championship at WAR GAMES 2021 — due to Lindsay Troy’s complete incompetence  — Pleasant terminated Yuri’s services and he has since gone back to Russia to drink vodka and play Lapta.

Once War Games was in the rearview mirror, Arthur Pleasant decided to take time off and go on excursion throughout the world. Competing in virtually every worthwhile promotion that could afford his services, Pleasant kept his eye on HOW. In particular, on the perfect moment to return and implement his specialized brand of chaos and extinguish The Flame with wrath, ruin, and every bit of calamity in between.

Pleasant chose his moment carefully and returned at REFUELED disguised as a member of the Elite Protection Unit (EPU) that surrounds Jeffrey James Roberts. To the shock of everyone in attendance, The “EPU” guard slid into the ring and beat the ever-loving shit out of Eli Dresden. Revealing himself by removing the helmet, Pleasant and JJR shared a smirk, suggesting a sinister plan had finally come forth and an alliance with murderous intentions had formed. The following weeks later, Arthur Pleasant revealed to the world that they would be known, henceforth, as The Devil’s Advocates.

Arthur Pleasant would play an integral role at ICONIC 2021 where he would nearly cost Conor Fuse the HOW World Championship in the finals of a one-night tournament by coming to the aid of JJR. It was at this very event where Arthur connected with a devastating Calamity Pain that would retire Hall of Famer Cecilworth Farthington from active competition. Though JJR would be unsuccessful in securing the HOW World Championship, this night proved that the Devil’s Advocates were a force to be reckoned with. Not so long after this event, Pleasant and JJR teamed up for their first official match in HOW and defeated the Hall of Fame team of Jace Parker Davidson and Jatt Starr, which would be seen as a precursor for what was to come in 2022.

During ‘The Maurako Cup’, which was a tag team tournament designed to reactivate and reintroduce the HOW Tag Team Championships and subsequent division, The Devil’s Advocates defeated the likes of The Stevens Dynasty, Hall of Famer Chris Kostoff and Steve Harrison, only to suffer their first loss to the HOW World Champion Conor Fuse and David Noble, known as the Noble Gamers. Though it would be their only loss in the tournament, through a technicality, they would not move on to March To Glory in the finals. Instead, Arthur Pleasant would get a shot at John Sektor for his record breaking reign as the LSD Championship. Arthur Pleasant would go on to challenge Sektor to a match that played in the champion’s favor: a submission match. Despite being at a disadvantage, Pleasant would do the unthinkable and end John Sektor’s reign as LSD Champion by forcing the referee to call for the bell after debuting an effective Guillotine choke.

Fighting Style and In-Ring Tendencies and Shit
Arthur’s “style” is a lot like your most of your relationship statuses on Facebook during the mid-00’s. No, not non-existent! It’s… complicated. Though on the surface it can be summed up with one word in “Hardcore”, Arthur has infused that style with a background in Muay-Thai/Kickboxing. And, of course, a lot of dickbaggery. If there’s an opportunity to punch you in the dick or tits, Arthur will absolutely seize it. He loves to fuck with his opponents and the crowd on an inhumane level. His dark, bizarre, and more-than-erratic behavior transcends his out-of-the-ring antics and follows him into (just about) every match. Much to the surprise of those who have followed his Deathmatch exploits across the world, Arthur is very adaptable to his opponents’ styles. Though “The Provocateur” may love to dance in the blood of his opponents –as well as his own– in ultraviolent matches, Arthur has been known to mix it up on the mat with gifted technical competitors and surprise even his harshest of critics for his “Garbage Wrestling” style.

Oh yeah! He’s quick as fuck, too. Good luck catching him if he’s provoking you in the cat and mouse game. It’s those lanky legs of his. And probably mechanical augmentations in his legs like it’s 2077.*

The “Goddammit! Why won’t you just fucking DIE?!” Psychology and Shit
To say that Arthur Pleasant has an immense pain tolerance would be a gross understatement. Often kicking out of moves at the count of one and thus getting into the minds of all his opponents, Arthur will come at you as relentlessly as The Terminator it-fucking-self. Yeah, you thought that fancy fucking flippity floppity signature of yours was it? Oh-ho-ho-HOOOOO now. Think a-fucking-gain, asshole. He wipes his ass with your stupid fucking indy shit.

Other Shit
Arthur has an on-going rivalry with Lindsay Troy that has spanned the globe. If only she would admit that he is the better wrestler and admires Arthur for his skills, his superior intelligence, and pledge her undying loyalty (and fealty) to him, then maybe they could be friends. Perhaps even BFFs!

HOW Career Win/Loss Record (and Shit?)

Calamity Pain: Pleasant sets his opponent up into a fireman’s carry position. Then, while pushing up underneath their body, he snaps down to the mat while bringing his opponent’s head down across both knees with an elevated double-knee codebreaker. It's savage as fuck and has been known to dislodge a brain every now and again. Plague of Mankind: Guillotine Choke, usually executed from a jumping grapevine position forcing opponent to exert all of their strength and oxygen out of their body, making “lights out” much easier.

Provocation: High Velocity Single-Leg Dropkick Occam's Razor Elbows: Expertly Placed Forearms to the head. Should only be used if the intent is to bust the opponent open. Due to an extensive background in Muay-Thai and God-Knows-What from the underbelly of Japan, Pleasant is a master of precision when it comes to specific skin tearing strikes.

(Road To War Games I) – In The Land of Savages

The Rule of Subversion

The Rule of Survival

The Rule of Surrender

FUCKING WITH THE DEVIL

Giving The Devils Their Due