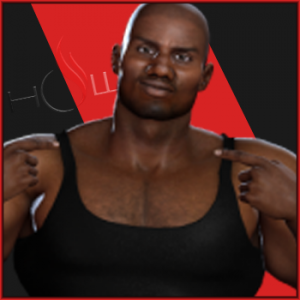 Darkwing sits in the Mayor’s office in downtown Los Angeles, the California flag and a picture of Mayor Eric Garcetti adorn the door leading to the Mayor’s actual office. Darkwing, wearing a gray button up short sleeved shirt with blue jeans and black nike’s with a white swoop fiddles in his phone. He’s sore and has a mild headache. Darkwing worries about the back to back weeks so soon. He used to do it, no problem, but he thinks now that this may make the week after…..aggravating.

Darkwing is pleased with his performance last week, albeit a bit weak at the end, he rushed a lot. But Bobbinette was able to come through.

Darkwing sighs, as he gets a text from an Arizona number.

Darkwing shakes his head. He gets the occasional random text, a wrong number or a disgruntled employee or something, but nothing like this. He ignores the text, and cracks his neck. It pops loudly, the Mayor’s secretary noticing.

The secretary was a middle aged white woman, with blonde hair in a bun and pink glasses. She wore a teal blue sweater and black long skirt and simple black flats. She was showing her age, as a few wrinkles showed.

“Profession? I thought you are a business owner. The sunglasses, the salad company, the marketing firm?”

Darkwing: Bless you for not knowing who I really am. I am….was, and now again, a professional wrestler.

Darkwing: Little known fact, I did a one off match in UPW in 2001 and beat John with the most devastating move in all of sports entertainment.

“Oh really? What move was that? Like a leg drop, or a power bomb, or maybe a belly flop…thing?”

Darkwing: You mean a splash?

Darkwing: No….it was the most devastating move in sports entertainment, the surprise roll up.

“Are you pulling my leg?”

Darkwing: A bit, but I did beat John once. Nobody cares cause John and I were essentially both rookies in the business.

“How did you really beat him?”

Darkwing: ahhh, he went for his blue thunder bomb like move, and I countered it into a roll up.

Darkwing: Yes. All the time. And my body won’t let me forget it. But despite that, I went back after 6 years.

Darkwing couldn’t even give a middle aged white woman who barely knows the business an answer. It just wasn’t there. Nor was his desire to speak publicly.

Darkwing: A friend called me.

The woman had more questions, but suddenly, Mayor Garcetti appeared from the inner door.

Mayor Garcetti: Mr. Crawford! It’s been a while. Let’s talk.

Darkwing rose, smiling at the mayor, who was a tiny man compared to him. The Mayor had on a dark blue suit with baby blue shirt and black and blue striped tie.

Mayor Garcetti: You know it. Step into my office.

Darkwing steps into the shimmering wood walled office. It had a window looking over downtown, and various pictures of family, friends and political allies. Darkwing remembered the first time he met the Mayor, and how he joked that Darkwing truly cares about the city since he doesn’t get paid for his work in pursuit of its improvement.

Darkwing walked over to one of the leather chairs and sits down. Mayor Garcetti sits down at his desk, and smiles.

Mayor Garcetti: Well? What can I help you with?

Darkwing: The Vermont Square Library. It seems the local Neighborhood Council approved the renaming or dedication? I’m not sure.

Darkwing: Okay. Fair. Well, is there anything I can do for that?

Mayor Garcetti: Well, I don’t think so. Curren is creating a plaque and that is going to be nice.

The Mayor was referring to Councilman Curren Price, of Council District 9. Darkwing was friends with the Councilman.

Darkwing: That is his district, huh? Well, that’s good.

Mayor Garcetti: It isnt common for you to come chit chat like this, we can text, you know. What is really going on?

Mayor Garcetti: Yes, its….a hard problem. I need the police, but I also serve the people, and the people are demanding accountability.

Darkwing: Would it surprise you to hear I was harassed by an officer last week?

Mayor Garcetti: Are you serious? Did you get his badge number?

Darkwing: No, It wasnt important. I handled him well enough. But I am tired, Eric. You know I have my ear to the ground politically.

Mayor Garcetti: I know. Hence why I take meetings with you. Curren and people over at VSEDC think you should run for City Council.

Darkwing: Nah….I rather influence things without those labels. I just want you to know that I am going to look into a police accountability commission, or something to help adjudicate these matters. You are right, people are demanding more equity in these matters. And as a black man, its irritating when we try to start these conversations, we get kinda written off.

Mayor Garcetti: Yes, I understand that.

Darkwing: So as much as it annoys me, I need white people to cosign policy proposals I and other black people come up with.

Mayor Garcetti: Okay. I hear you. But I need you to kind of….(searching for words)….remove yourself from wrestling first.

Mayor Garcetti: People love you, but that High Octane Wrestling…..they have been into some wacky stuff. Stuff that could stain you, and anything your name is attached to. You’re a black progressive. Republicans will take you to task as some crazy minority who doesn’t know what he’s talking about. We can’t have that if you really want to make changes. Or run for office, or both.

Darkwing: Well, I don’t have to do that today.

Mayor Garcetti: Im sorry, I know that might not be what you expected to hear. But your desire to help improve the black community requires you stand with it, with nothing like that wrestling company hanging on you. Lee Best is an evil man, and he lets many things air on his content that could be tied to you. But until you make that choice Matthew….give em hell this week, okay? I used to be a fan.

Darkwing: Will do, Mayor.

They shake hands and Darkwing walks out, nodding to the secretary as he does.

Darkwing sits at his house on the cliffs in Palos Verdes, CA. He’s laid on his soft dark blue couch, the TV off, a quiet energy almost humming as the evening sun sets.

Darkwing wears a simple white t-shirt and black and grey basketball shorts, something he lounges around in often.

Bobbinette: We got these two nobodies this week. How are you feeling?

Darkwing: Im so out of touch, it wouldn’t matter if they were actual somebodies. Outside of Kostoff, Scottywood, and Sektor, Im generally lost on this incarnation of HOW.

Darkwing pauses and decided to actually talk to his friend for once.

Darkwing: Why do you do this?

Darkwing: Wrestling. Don’t you have other stuff you could do? Other projects? Visions? Community work?

Bobbinette: Yes, thats letting HOW and the world know that they can’t keep sweeping black wrestling greats under the rug.

Darkwing: And then what?

Darkwing: You haven’t thought about the stench of this business? How so few of us have good lives after destroying our bodies? I had that life, Bobbie. I….won. I was one of wrestling’s finest, and I walked away. I built a legacy. I built businesses. And…..I dont see how HOW fits with all this.

Bobbinette: Tell me you are going to be better than last week. That you’ll get more rust off.

Darkwing: Yes, Bobbinette, I’ll be one step closer to Darkwing.

Bobbinette hurries off the phone. Darkwing frowns. She clearly had no room in her mind for Darkwing’s issues. His hand trembled as he thought of last weeks match.

Darkwing starts to toss his phone, but thinks better of it. Suddenly, the Arizona number flashes on the screen.

Darkwing squints and shakes his head.

‘I am coming for what is mine.’

Darkwing feels his stomach plummet. He is worried a bit. Who is this?

‘Someone who is ready for you.’

Could it be Jatt Starr? No. Jatt wouldn’t use these types of wordings or English in this way. Jatt is comical, jovial, and the Joker to Darkwing’s batman. No, Jatt wouldn’t do this. Could it be his opponents? One of them could have spoken to Starr or Lee or maybe even Kostoff.

Kostoff and Darkwing had a falling out years ago, could this be his chance to get Darkwing back? No….didn’t seem like Kostoff’s style.

Darkwing stood up. It was time to start packing.

Darkwing walked into his kitchen and as he grabbed some sliced salami out the fridge to snack on, his phone rang. He didn’t check to see who and just answered it.

Brian Bare: Hello Darkwing, this is Brian Bare. I was wondering if you had considered what happened Sunday and wanted to put some comments on the record for the HOW recap show Saturday. I know the ring rust has been an issue…

Brian: Just one comment, Darkwing. One simple question. Why did you come back?

Darkwing pulls the phone away from him. He sets it on the kitchen island and walks into his bedroom. He throws himself on the California King sized bed, and grabs a pillow and buries his face in it. His whole body has been stimulated and it HURTS. He feels the cuts in War Games, the back spasms from Smokey when he won the ICON title, the TCD from Narcotic when he lost the HOW World Title. The Calf…..

Darkwing screams into his pillow as all of his wrestling career rushes down on him in a hailstorm of bad memories and physical pain that renders Darkwing into a ball of trauma and suffering.

Darkwing doesn’t know if he can be better. Maybe he can. What do you think?

Darkwing was The Rock at one point and now he’s late 2000’s Ron Simmons. He isnt a role model, he isnt a great, he’s a scared and trauma riddled 37 year old man worried his next match will be his last.

And it is there he realizes that that might be his ticket.

Cause wrestling is hard.