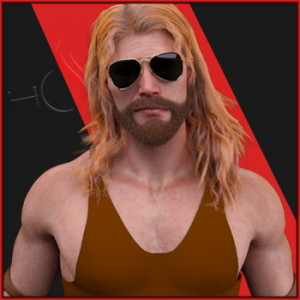 Two weeks from the biggest match in Rah’s professional career.  Sunny O’Callahan told the wrestling world on Saturday night’s Refueled show that Rah was in the gym and training for his match with HR Lackey Sutler Reynolds-Kael at the upcoming March to Glory pay per view show.  In her ‘official’ role of the ‘only one’ who speaks for Rah, O’Callahan tried to sell the notion to the fans of High Octane Wrestling that Rah was arduously training back in Southern California preparing to ‘unleash the fury of a supernova and bring down the heat of a thousand suns’ on Sutler at March Glory.

It was all a lie.

The man cast a lonely, solitary form, arms folded, legs stretched out from his six-foot eight frame, and trying to catch a quick nap while sitting on a couch inside the nearly empty surgery waiting room.  He occasionally glanced up at an electronic board which kept track of surgeries under way and completed and kept a close eye on the bottom listing of the two surgeries currently in process.  Obviously, since it was a Sunday, emergency surgeries were the only surgeries taking place.

The man you all known as Rah did not look the part on that Sunday evening.  Far, far away from the sunny beaches of Southern California, gone were the ceremonial flowing robes and all the regal-ness that Rah exudes, he dressed and appeared to be like any normal man who unexpectedly found himself sitting in a hospital on the weekend.  Today, he was just Randy Rahman, concerned son and only child.  All the other stuff, the fun and frivolity that went along with being Rah didn’t really matter much in the big scheme of things at the moment.

The phone call came very early on Saturday morning.  For the record, Rah was in San Diego at that time, in bed, and anxious to get started on training for the match with Sutler.  Once fully apprised of the seriousness of the situation, and over the strenuous objections of Sunny O’Callahan, he made arrangements to fly into Nashville, drive down to Elkton to be with his mother at the hospital and more importantly be there for the surgery.  Running on very little sleep, he took great pains to write down everything that the nurses and the surgeons told him about the situation at hand.  While Sunny O’Callahan cut her promo on the Refueled LV show and bragged about the fact that now Rah finally had someone ‘who actually knows what the fuck she’s doing running the show for him,’ he was with his mother in the hospital room and stayed with her all the way until they reached the doors to the operating room- just before they wheeled her inside.

Yes, he received numerous texts from Sunny O’Callahan, Sports Entertainment Barbie, Ray McAvay, Joe and Laura Bergman, and yes, even Dawn McGill.  He casually skimmed through and basically ignored Sunny’s texts because they were full of pseudo-inspiration tripe mixed with mild innuendo.  The others, he made a point to answer each and every one of them in order to keep them apprised of the situation.

Other than those communications, he was alone, sitting in an increasingly uncomfortable chair, and waiting.

March to Glory?  Wrestling in general?

The last thing on his mind.

Little did he know that back in the land of surf and sun, there was a storm brewing…

Still tired and jet lagged from the Sunday flight from Chicago, Sports Entertainment Barbie walks briskly down the hall, dressed in her ordinary civilian attire of her real-life alter ego- Caroline Lewis.

Nearing Rah’s office, Caroline discovers a much peculiar sight.  The door to Rah’s office for some unknown reason is open.

Sports Entertainment Barbie: Okay. I could have sworn that door was closed and locked on Friday before me and Sunny O’Callahan hopped a flight to Chicago for Refueled LV.

Continuing forward, a curious Barbie reaches the open door.  She peeks inside and does not like what she sees.

Barbie: What the fuck is going on here?

She finds Sunny O’Callahan perched on Rah’s golden throne of solitude (miniaturized for office use)- big, big no-no.  Worse, she was using his computer- an even bigger no-no.  Now, tensions were already off the charts between Sunny and Barbie since the two clashed at Saturday night’s Refueled show and O’Callahan verbally dressed down Barbie on HOTv for talking with Blaire Moise.

For her part, Sunny’s gaze remains firmly fixed on the monitor and her hands busily type away at the keyboard.

Barbie: You’re not supposed to be in here!

O’Callahan just waves her away dismissively and the Irish-born blonde continues to type away at the keyboard.

Barbie: I am serious.  NO ONE is supposed to be in here when Rah is gone.

Sunny O’Callahan: Shut up and let me work.

Barbie peers over Sunny’s shoulder and sees what appears to be a typed out promo of some sort.

Barbie: What are you doing?

Sunny O’Callahan: What the hell do you think I’m doing?  Since Rah is somewhere in the backwoods of Tennessee with his mommy, someone has to step up and cut his promo for March to Glory.

Not quite believing that she’s heard what she just thinks she heard, Barbie shakes her head to clear her ears.

Barbie: I’m sorry, I didn’t catch that.  What are you doing?

Sunny whirls around and shoots daggers out of her eyes.

Sunny O’Callahan: You heard me.  If Rah’s not going to do it, then someone has cut his promo for March to Glory.  I am the official spokesperson for Rah.  It’s my responsibility to make sure his voice is heard before March to Glory.

She wags her finger in Sunny’s face.

Barbie: You shouldn’t be doing this.

Sunny swipes her hand away.  Then she points her index finger at Barbie.

Sunny O’Callahan: Listen sports entertainment bimbo.  Since you don’t seem to grasp the concept let me educate you.  Rah faces Sutler Reynolds-Kael at March to Glory in less than two weeks.  This is important.  Rah needs to win this match.  He’s the Champion of the world for Christ’s sake and instead of focusing on what he needs to do, Rah is back in Tennessee wallowing over some illness with his mother-

Barbie: WALLOWING OVER SOME ILLNESS?  His mother had major surgery you malevolent, heartless bitch!

Sunny O’Callahan: The voice of Rah must be heard and he’s not capable of doing what it takes to win this thing then someone has to speak for him.  Mainly, me. The official spokesperson for Rah, the Sunshine God and Champion of the World!

Barbie: No.  This isn’t happening.

Sunny O’Callahan: That decision is way above the pay grade of someone who’s main job is to be eye-candy, wrangle a herd of former sorority chicks who can’t stay off their cell phones, and argue with drunk people at ringside.  Stay in your lane.  Brainless, blonde ditzes like you are a dime a dozen.

Sunny O’Callahan: He’s not just winning this for me.  There’s a lot more riding on this, babe.

She snatches a stack of papers from the desk and shoves it in Barbie’s face.

Sunny O’Callahan: Do you realize what’s waiting for him if he wins this match?

Barbie: What the hell is this?

Barbie’s jaw just falls.  She mouths ‘wow’ because who in their right mind would ever connect the dots between Rah and corporate sponsorship.

Sunny O’Callahan: If Rah can somehow find a way to defeat Sutler Kael, I’ve got companies who are waiting, who are willing to sign on for big money.

Barbie: I can’t believe you are doing this.

Sunny O’Callahan: Oh come on Barbie.  Look at the bigger picture here.  If Rah wins at March to Glory, he could make millions of dollars from corporate sponsorship and endorsement deals.

She points at Barbie and then herself.

Sunny O’Callahan: Both of us would benefit from this as well.  Rah could pay us both more money.  You know Rah.  He is a complete doofus when it comes to this kind of stuff.  He needs someone who can see the bigger picture… he needs-

Flashing a smug smile in return, Sunny returns to what she was doing.

She reaches down and yanks O’Callahan up and then off Rah’s office-sized golden throne of solitude.

Sunny O’Callahan: Wh-what are you doing!

Barbie: There is no way I am letting you do this.

Barbie grabs Sunny around the waist- she tries to push Barbie back- no go.

Sunny O’Callahan: Let go of me!

Barbie suddenly feels the sharp pain that only a spiked pair of heels can cause.  She releases Sunny who dives towards the keyboard to hit enter.   Barbie grabs her by the waist and reels her back.

Sunny sees the Sunshine God standing at the threshold to his office.

Stunned beyond all comprehension, Sunny finds herself unable to speak – for once – at this particular moment of time.

Barbie breathes a sigh of relief.

Barbie: How did you get back here so fast?

Rah: Better.  She left the hospital on Friday, two days from now, and Rah took her home.  However, on the plane back to San Diego, Rah saw this…

He points at the monitor of the laptop computer and makes a sour face.

Rah: ….this document posted on the HOW website and it repulsed Rah so much that Rah secured the use of a time machine- because everyone seems to have a time machine these days- and came back in time to prevent this atrocity from seeing the light of day.

He motions to Barbie.  Barbie lifts the diminutive former official spokesperson for the Sunshine God Rah up.

Barbie: I’m just going to take out the trash if you don’t mind.

She carries O’Callahan kicking and screaming out of the office..

…and out of the building.

Rah wanders over to his laptop and reads everything that Sunny wrote.

He hits ‘select all’ on the Word document and a gray box envelops the entire promo.

One touch of the delete button and…

It’s a Thin Line Between Love and…

Once in a Lifetime