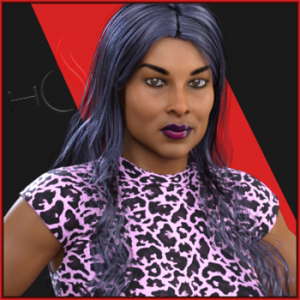 Chris, Chris, Chris… Did I get under your skin? You don’t have to answer that, I know I did.

Of course my words bothered you, to the point that you had such a knee jerk reaction that you decided to go full force. You showed your true colors as you always do.

Sure, you popped the boys in the back. But you don’t say anything of substance to actually help people. Is it all about me? I point out that I shattered the glass ceiling and have taken opportunities I’ve had to be a role model. I’ve taken my chances to give people similar to me someone to look up to.

I use my platform, like so many other black athletes have done before me, to bring awareness and lift up those who are suffering. I’ve been about bringing the Woke era into HOW. I’ve been checking people’s privileges, and that makes people uncomfortable. I am a part of something bigger. You don’t get to gatekeep that.

I am half white, but let’s be honest white people are terrifying. They have weaponized my skin color to where all someone has to say is “they looked threatening” to justify murder. It isn’t the Boogeyman, it’s the history of this country that proves it.

“Black on black crime.” Criminalizing brown skin people. You don’t hear of white on white crime. Why is that? To make us seem less than human, we are animals incapable of being seen equally. Truth time, you get pulled over with red white and blue. You are an American citizen, a god-fearing person and you are let go by the police. I get pulled over in my car driving in a neighborhood I have grown up in and I’m questioned and having guns pulled on me because I look “suspicious.”

This isn’t some random what if, this is my reality. I do love your Whataboutism.

Yes, Chris, I want to be oppressed. You caught me! I want to be accosted by a sales clerk who asks me if they can help me then tries to point me to their clearance section while folding clothing at each area I look at.

You’re absolutely right, I love being told by fans that wrestling is a man’s sport and I know nothing about it.

Yeah, I absolutely love going to the park and being asked what agency I nanny for. Because my daughter has light skin and I can’t possibly be her mom! Caught me red handed!!

My skin color and my gender identity are all year round. I care about women’s rights. I care about women being able to protect themselves. I care because at the end of the day my skin? I can’t take off. This is who I am. It’s not who I asked to be but it was who I was born as. That’s not a gimmick! I have lived through the Struggles. You can’t check me and shouldn’t try to because who the hell are you? What right do you have? Your self entitled rights that’s where it is. It’s no surprise because that’s who you are and what you do it’s what you’ve always done. You’re one in a long line of oppressive patriarchal figures.

But you want to talk about tarnish reputation? Let’s see how long your back after you lose that belt. Oh wait, we know that once that belt is gone; we won’t see Christopher America for another 5 to 10 years. You’re only around until you don’t look good and then you leave.

That’s one of the many difference between us. I am real, the highs, the lows. Being human, the imperfections and all I’m still here. I had a goal in mind and after I achieve it then I’ll figure something else out. I said I was going to win war games 2022 which was a very lofty thing but it got people talking. I didn’t even make it into war games yes thank you for pointing that out but it got people talking.

But see we forget America is the hero in this! America is never wrong! America never rewrites history to make themselves look better. America always tells the truth. I’m sorry I don’t follow blind patriotism and ask questions. I’m sorry that I see through the layers of trash you continue to spew.

When was the last time I marched? What have I done for a cause? If you’ve been paying attention (I don’t expect you to, you’re you and narcissists are too wrapped up making sure they present the right image.) I’ve been bringing the Woke era into HOW. But I don’t expect you to acknowledge it.

When I talked about reproductive Rights your buddy JPD kicked me in my vagina and made a joke of it. I’ve talked about “shark” week and people groan and roll their eyes because it’s “gross” grown men being disgusted by a natural thing that happens in a body. But maturity and wrestling don’t mix. Just like compassion and understanding don’t exist here either.

You don’t care about other people you never have, I care about people and I put a face and a voice and an action to causes. Again Mr white merica you don’t get to gatekeep me. There are dozens of proud patriotic white men in wrestling but there’s only one me boo.

Yes you’ve got a title… you never faced Conor one on one for that belt. In fact it’s funny that you should bring up Conor when you have made your way through The highwaymen and not even acknowledged the man whose title you’re wearing. Yes you won war games with Tyler best it was still a best and the real champion you’ve kind of avoided haven’t you? He’s been back and he’s been there to support me and be a true friend and I can’t thank him enough for that. You want to try to shine a light on something shine a light on your fear of facing a worthy opponent yes you’re making your way through The highwaymen snorefest.

This is what I do for the cause I use my voice. And you will not silence me. Yes congratulations you brought up fat shaming! You’re such an awesome person for that. (By the way I prefer Mexican pizzas not being burritos, check your facts.) Way try to body shame me. I am the plus size positive role model for girls. I’m body positive because I know what no matter what shape or size I’m in I still know how to bring it in the ring. I still know how to command a crowd with my crown my scepter in my attitude. I am breaking body dysmorphic stereotypes.