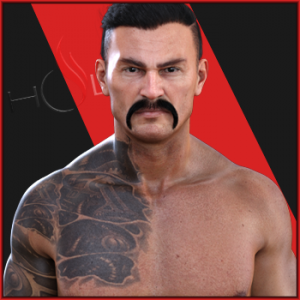 You’re not much of an onion are ya Clay?

Sorry, I forgot that you come from the same place as Scoot Stoovens so allow me to explain that in simple terms so that your slow Texan brain can comprehend.

There’s no layers to ya. You’re one dimensional. A boring, big brute who failed at making it to the NFL so you chase success as an athlete through the circus of wrestling. Yeah, that’s right, I did a little asking around about you. Turns out that’s about it. You haven’t exactly set the world on fire as a wrestler either. A brief stint in Japan learning the ropes before coming back to the States.

Now, I know it seems as though I’m dismissing you as a credible opponent and largely that’s because you are. However, I am actually very nervous about this match. As I’ve already stated, this is new territory for me. However for you? It seems what you lack in charisma and actual wrestling ability you make up for by being good at punching people. This tournament may just suit you to the ground and give you some kind of advantage over me. Not only that, but I really don’t know you any more than you claim to know me.

I really hate not knowing who I am facing.

Alas, your greatest strength will serve no purpose for you when you enter that octagon against the Gold Standard. You’re slow. I may be older but my Cuban flair keeps me pretty nimble on my toes and I’ll have you chasing shadows. Your height advantage is a disadvantage because you’ll have to punch down and I’ll just grab that motherfucker and gator-roll that shit until it comes out of the socket.

I’ll do it too, because I’m not tied to the realms of wrestling ethics where I can only in good conscience purposely injure someone who has wronged me. This isn’t wrestling, meatball. This is MMA. Bitches get their bones broken all the time and you’re about to get your shit pushed in.

Yes, I’m going to fucking rape you. Not literally, before you start reaching for the K.Y and poppers. Simmer down now, Big Tex. No I mean when I absolutely school you in the art of submission wrestling you’re gonna be left in the fetal position underneath a cold shower as your brain replays the soul crushing humiliation.

Some people call it a humbling, and on account of all that hot air you were blowing at me in your last promo? That would be an accurate description.

But I just call it good old rape.

I don’t know if it’s the fact that you’re a Texan that triggers me? Or whether it’s because you’re a classless brawler who’s unknowingly shitting all over  the sport I’ve spent a career trying to turn into an art form. You are to-wrestling what Bowling is to sport. Just a fucking sad side show for those not athletic enough to pacify themselves with. You’re a six foot seven mockery of this industry. A failed footballer who thinks he can just make a coin in the wrestling industry because throwing your sledgehammer sized fists at guys that weigh a hundred and ninety pounds is easy.

But this is anything but easy, mi amigo. You think that you can make a name for yourself in one night against ME?

Motherfucker, who in the actual fuck do you think you are?

Where the fuck did Lee dig you up because it seems like they’re literally letting anyone in now.

Let me tell you a home truth here cowboy. You’re not even gonna get a post on the fucking website when they release you. You’re gonna fade into the good night like every other ‘could-have-been’ who washed out of the charity round of the tournament. ‘Allow seventeen fisher price snowflakes in and see if just one of them has the stopping power to amount to something.’ That’s the company motto.

Guess what, Byrd name..you’re not the one in seventeen. You will never wear the ring I wear. The ring that took me over a decade to earn through nothing short of respect and a list of accolades that you can’t even spell.

Make a career out of ME?

You will never amount to shit, and it all just boils down to bad luck.

They paired you off against a bonafide career killer…

Not everyone gets a fairy-tale ending, kid