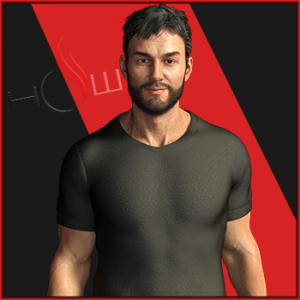 Ray McAvay sat behind a desk pretending to work- par for the course.  The name holder at the front of the desk prominently displayed McAvay’s placard inside.  McAvay worked away until an off-screen disturbance distracted him.

“Tell your lackey to get lost,” Carlisle barked snottily at McAvay.  “I’m America’s Favorite Female Broadcaster, Elizabeth Carlisle, and I have important journalistic business that involves me, and my fans who love me, that I want to discuss with you.”

McAvay stood up from his chair and motioned her towards an empty chair.  “By all means then Elizabeth, have a seat.”  He then waved the secretary away.  “I can handle this.”

The door closed and Elizabeth quickly got down to business.  “Listen Ray, my fans, who love me and adore me, would like to see me, America’s Favorite Female Broadcaster, to do a story on this whole wrestling thing.”

McAvay leaned back in his chair and twiddled his fingers.  “Well, Elizabeth, I suppose I could make a few of the wrestlers available to you for interviews.”   McAvay rocked back gently.  “And I guess you could film a couple matches.”

“Are you crazy?  My audience doesn’t want to see two stiffs they’ve never heard of wrestle.  What they want to see is me, Elizabeth Carlisle, America’s Favorite Female Broadcaster!”

Ray’s face scrunched up in puzzlement.  “And your point is?”

“They’d rather see me wrestle instead.”

“You?” guffawed McAvay.  He slapped his hand on his knee.  “You wrestle?”

“I don’t think it’s funny,” Elizabeth retorted.  “And neither do the fans who love and adore me, Elizabeth Carlisle, America’s Favorite Female Broadcaster.  Everyone knows wrestling is all fake and choreographed!”  She stood up and leaned over the desk.  “So get me someone to wrestle.  Make it look good.  Make me win the match because that’s what my public wants to see.  Me.  America’s Favorite Female Broadcaster.   Elizabeth Carlisle!”

McAvay dwelled on her proposal.  “Okay,” he relented, “I’ll make sure you’re taken care of.”

“Do that,” snipped Elizabeth.  She whirled on her heels and took her leave.

Ray waited for the door to close behind America’s Favorite Female Broadcaster.  “Oh yeah,” he said to himself with an evil grin.  “I’ll take care of you all right.”

She’s a six foot two, blond demolition machine in a short skirt and owner of the most lethal stiletto heels this side of the Mississippi.  Ladies and gentlemen- VICTORIA McGILL!”

The crowd rose and cheered as Victoria methodically walked to the ring with a Singapore cane in her hand.  No stiletto heels tonight, she wore regulation wrestling boots to go along with her leather mini-skirt and halter top.  Her facial demeanor said it all- grim, pissed, and ready to rip someone’s head off.

“Well, not in the real sense,” he replied.

Elizabeth went over to the camera guy and pretended talk live on the air.  “This is Elizabeth Carlisle live from…well…it doesn’t matter where I’m at.  What’s really important is I, Elizabeth Carlisle, America’s Favorite Female Broadcaster, am about to wrestle right here on live television.”

The banter continued for a few minutes.  Victoria stood silently in the middle of the ring and glared at Carlisle while America’s Favorite Female Broadcaster did a running play-by-play of what they were supposed to be doing and how the ‘match’ was supposed to be choreographed.  Finally, Carlisle actually locked up with Victoria in the middle of the ring.  Well, sort of.  Victoria’s one hand locked up with both of Elizabeth’s hands while her other hand gripped the ever present Singapore cane.

“See?” Carlisle said to her ‘audience.’  “I’m now wrestling my opponent.  Watch this.”

She tried a few wrestling moves.  Over the next five minutes, Carlisle botched several wrestling holds and maneuvers in a row while Victoria stood in place, unmoving, silent, no expression, and holding her Singapore cane at her side.  The crowd laughed at Elizabeth’s attempt at wrestling and the resulting light-hearted hilarity was perfect for the vapid nature of broadcast television.

According to Elizabeth’s script, the time had come for the finish.

“Okay everyone,” she said. “Now, we’re at the point of the match we’re I hit my big move on my opponent, pin her, and win the match.  Let’s do it.”

Carlisle launched herself into the ropes and slammed into Victoria.  America’s Favorite Female Broadcaster bounced off of her and Victoria didn’t budge an inch.

For the first time in the match, Victoria broke a smile.

Carlisle stomped up and down.  “HEY!” she yelled at Victoria, “according to this script it says that you’re supposed to fall down so ME, AMERICA’S FAVORITE FEMALE BROADCASTER ELIZABETH CARLISLE, WINS THE MATCH!  WHAT’S THE PROB-”

In one swift movement, Victoria raised the Singapore cane and…

Hall literally jumped out of his chair.

Victoria even caught the bar crowd completely by surprise.  After a brief moment of silence, a huge cheer raised the roof of the bar.

Elizabeth’s camera guy gawked at her on the mat.  Carlisle lay face down on the mat with a huge gash on her forehead gushing blood everywhere.

“You can’t do that to her!” cried out the camera guy.  “She’s America’s Favorite Female Broadcaster!”  Then the camera guy unwisely raced across the ring and attempted to hit Victoria with the camera.  She easily sidestepped the clumsy attack and…

…cleanly took him out with one Singapore cane shot to his back.

All hell broke loose from there.

Joe Bergman woke up from what clearly was a nightmare.

Tori McGill rolled over in bed.

“Just go back to sleep.  You’ll feel better in the morning.”

Leave the Circus at Home

A Pepsi and a Smile