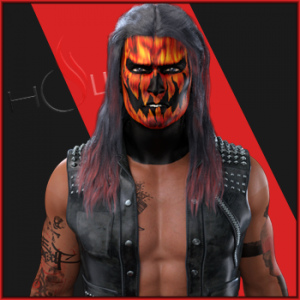 Chance? What is the definition of a chance? Chance can be anything from wanting a certain roll of the dice to land on a certain number, it could be waiting for the right cards to appear in a game of Texas hold em’ it could even be receiving a phone call with that job you have just been waiting for. There are many types of chances in life; a lottery is no different. This week we have seen Lucian Santangel enter his name into Lee’s Lethal Lottery which will take place at the next High Octane wrestling event this Saturday. Now it is unclear if Lucian will even have a match as it is all kept in the dark until the night. The matches are left up to chance. However what if there is a way that luck could be apart of the matches rather than chance? Would that mean that Lucian has a better way to feature on the card?

The last time we saw Lucian he was pondering around an old house looking at photographs of his childhood, we learned that not only is Lucian Mexican and proud to be Mexican; but also that he comes from a long list of wrestlers, with his debut in High Octane Wrestling possibly just around the corner I wonder how long it will actually be before we see him with his hand raised in the air after grabbing his victory, I mean it has to happen right? Or will it just be down to chance again if he should win?

As the water falls down slowly in a picturesque motion I reach my hands out to catch the droplets of water flowing over my body, I slowly tilt my head upwards to meet the water and crash water over my face from my hands.

“Nothing beats a morning shower,” I say to myself whilst basking in the warmth and steam flowing around me.

As I stand here for a moment I let out a deep sigh as I reminisce about the past once more.

“As much as I would love to stand here all day, I have to get on with planning my future” are the next words out of my mouth as I slowly turn the shower off by twisting a dial to the right. Instantly the rainfall stops and I grab a towel which is hanging up waiting for me to get out of the shower. I walk over to the sink and look at myself in the mirror.

“all fresh and ready to start the day”

“Its currently seven minutes past eight in the morning, I am up, washed, clean and ready to start the day, and today is not any day, no today is the start of my new life, you see I have not only signed on the dotted line when it comes to high octane wrestling but I have also put my name down for the lethal lottery.”

I start to comb my wet hair with a fine-tooth comb.

“Just what is this lethal lottery I hear you ask? well, it is simple. Kind of, names go into a hat, and one by one they are picked out to decide what match you will feature in, I like that concept but it also reminds me of a time in my past, back in Mexico where I left something up to chance, and that, well that did not go too well…”

As I finish combing my hair I look deeply into the mirror and drift away on a memory.

“Back in the early years I was placed into a match where I would not know my opponent, I remember it like it was yesterday, I remember my godfather taking me to a carnival, you know not so much the one with a high top and animals doing tricks, no this was more the oddballs, the freaks, the creatures of the night who would entertain the public for little money, people would flock to see what great delights and wonders the world would put in front of them.

I remember we had signed up to entertain the public with some unique wrestling events, it would be a giant mammoth of a man versus a dwarf or a man with only one arm against a man with only one leg, you get the drift, anything which was not normal would happen in that ring.”

I smirk to myself before chuckling

“Imagine, a young eighteen-year-old on the road traveling from fairground to fairground with all the freaks of nature that Mexico could throw together, it was a hell of a time and one that I enjoyed very much. The reason why I agreed to it was that my godfather said it would be great exposure for me, how was he so right in the guidance of me, it exposed me to many crowds, of course, they never were there for the wrestling, they were there to see two freaks batter the hell out of each other”

“this one night I remember it was myself pitted against a special guest!, now when I turned up that night I was informed that my opponent was sick, I was gutted, I have a passion for performing and the chance to not appear was something that I was unable to stomach, I mean if I am here training myself and getting to a good standard then why cannot my opponent do the same? But this wasn’t what you would call professional wrestling, this was catch-as-catch-can wrestling. The aim of the game was to manipulate your opponent’s limbs so they could take no more and quit.”

“so here I am, bouncing in the ring waiting for my special opponent, I rest up against the ropes as the crowd starts to throw rubbish, cans, bottles, you name it, whatever was in their hand they used to shower me in it. I am nobody to them other than a young masked wrestler with two arms and two legs, admit I only weighed around one hundred and fifty pounds at the time so I guess they saw me as nothing more than a masked lampost, but still, here I was waiting for my opponent”

The lights turn off.

The tent is left in utter darkness,

“I remember thinking to myself, what the hell is this?, is it a new stipulation that I now have to fight in the dark?, I mean I am down with a lot of things but who is going to see me if we are to wrestle in the dark?”

A voice speaks out on a microphone

I know this voice, it is familiar to me.

“Suddenly with that, I feel an almighty smash around my head. Like a tree I fall straight to the canvas, however, the sound can be heard all around the tent.

“oooooh” comes from the crowd as the lights come back on, as I slowly open my eyes I can see that the boots of my opponent next to me. I raise my head up from the mat and glance a look upwards to see my godfather holding a chair with his arms stretched out like he is on a crucifix.

Great, my mystery special opponent turned out to be the man who has spent the best part of my life training me, he taught me all these holds and moves and here he is with a chair in his hand. What the hell is this crap? I don’t know how to fight dirty!”

“Another shot to the head sends me dizzy as I try to collect my thoughts. I guess this is how life is going to pan out then, one day I can be training to a fair fight and just in the blink of an eye things can spin on its head and turn into a match where you least expect things to happen.”

My head sinks into my hands as both hands start to rub and gently massage the temples on both sides of my head.

“You see that night taught me a valuable lesson, that it is pointless training to face someone when your opponent is never named, for I do not know who I will be facing. A match left to chance is a very dangerous match to prepare for, take everyone who I could be drawn against, it would be very stupid of me just to train one style in order for me to achieve the best possible outcome. So what am I going to do about my match this week should I have one?

That’s right, I am not going to train any style at all to face my opponent with, because you see they have been showing up week in and week out in High Octane Wrestling, they already know their opponent’s moves, their strengths, and their weakness, but what they don’t know is me. They have never faced me before, nobody has ever watched a wrestling tape on me highlighting my past matches. I am a completely unknown entity, I am a man who nobody knows anything about.

Imagine that, what if Lucian is just a re-branded name for a fighter that in the past you just couldn’t beat, that one man who was just out of your grasp. Maybe Lucian is more than just one person, maybe Lucian is a mixture of Mexican wrestlers trying to make a point that no matter how ready you think you are that you actually will never be ready to face him in the ring.”

I chuckle to myself again, this time slightly pulling my hair with my right hand, slowly my I grasp the strains of hair and pull some strands out.

“You see what I can promise you is that this week; should you get to see Lucian in action he will bring you many styles rolled into one, he will bring you the great Mexican luchador style that will capture the fans in awe, he will take the high risks and show you his athletism. He will also bring you the great catch-as-catch-can style that he was trained at the fairground, I will show you holds and nerve manipulation that you have never seen before, and I will also show you that this Mexican can be as hard-hitting as the best brawlers out there.

All the King’s Horses