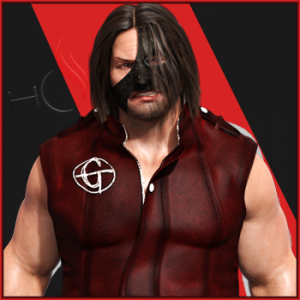 Never underestimate the power of an angry man.

Trust your ol’ Uncle Jimmy on this one, folks… ain’t nothing in this world more dangerous than a man on a mission. Than a man with an axe to grind. Now, I know that here in H O Dubya, a man wins a championship and has to do a whole lap around the stadium to celebrate, but today isn’t the day for a ticker tape parade, and James Cornfield isn’t the type to celebrate winning a battle when there’s a whole war looming ahead. Pro Wrestling: Assault has fired the first shot, earning– not stealing, but earning– the HOTV Championship at March to Glory.

But it’s only the first shot.

With the power and resources of Michael Oliver Best, and the wrestling know-how and talent of Pro Wrestling: Assault, High Octane Wrestling is going to become the product that it was born to be. A mecca to the sport of professional wrestling, without all the bells, whistles, murders and cardboard cutouts that it’s evolved into over these barren years of “High Octane” television. Now we drew blood against Jeffrey James Roberts, and sent him back to the correctional facility that he belongs in. But the war has only just begun, and every week ahead is a battle.

A battle against angry men.

Men who are not to be underestimated.

For one hundred seventy days, the High Octane Television Championship Division was ground to a squelching halt, held tyricanically beneath the boot of a sociopath, who by legally dubious means, was permitted to get his hour of state mandated exercise on Sunday nights at Refuelled. Jeffrey Roberts didn’t just kill seventeen people in the state of Mississippi, folks, he killed the whole danged division. He took a championship meant to grow new starts across multiple networks, and turned it into a weekly slaughterhouse freakshow. On Sunday, March 27, 2022, that division was reborn.

And it is chock full of angry men.

Men with a point to prove.

There is a target on the back of GenoSyde wider than the handicap stalls at fat camp. Angry young men, looking to make their mark in High Octane Wrestling. To prove their worth to the brass watching in the back. And hell, I can’t say I blame ‘em… it’s a fighting division, only strap in the whole company that gets contested EVERY SINGLE WEEK. And whether it be by fate, by destiny, or by just plain old bad luck, Xander Azula has found himself in position to… contest.

Now I don’t know if your parents spelt your name with an X cause they knew you were a strike out early in life, but I must say that your journey through H O Dubya so far has been a big fat swing and a miss. Don’t worry, now, I’m not here to belittle or berate you, Mr. Azula, but sometimes you just have to state the facts as they stand. You have amounted to nothing. Barely lived up to the too-much money they’re paying you around here. Probably been some days you thought about packing it all up and heading to bluer pastures, but all that changed on Sunday night, didn’t it?

See, you sent the world a message.

You stepped out from the shadows and announced yourself to the world. You knocked Darin Zion on his behind, and you put High Octane Wrestling on notice. And that message, boy… that message was received loud and clear. I can admire your tenacity. I can admire your drive to succeed. I can admire that you know how to get noticed by management, and they sure did notice. You shot your shot and earned yourself a shot at the HOTv Championship for your efforts, but that’s about where your luck started to run out.

It’s over before it’s even begun.

Xander Azula is open for business, and that’s all fine and dandy for you, kid, but I need to remind you that you ain’t stepping into the ring with Darin Zion this week. You are stepping into the ring with GENOSYDE. With an unstoppable monster who is satiated only by the final bell. With the HOTV Champion… the man who ripped the championship clear from the hands of the most dominant champion in history. So while I respect you stepping out of your shell and choosing to make a name for yourself around here, I’m going to offer you a single piece of advice.

GenoSyde is an angry man.

The voice is much higher than you’d expect from a veritable giant, as it rings out through the high ceilings of a much higher tech wrestling gym than usual. It would appear that Michael Oliver Best has opened the purse strings for his new HOTv Champion, because the man known as GenoSyde isn’t just howling in pain like a little bitch… he’s doing it in a state of the art training facility.

“Christ, Nelson.” Gunner Knight grumbles, putting his hands on his hips. “Just put the fuckin’ mask back on.”

It was only one punch.

A pulled one, at that— he’d barely connected with a closed fist, under the strictest orders from James Cornfield not to injure the new money making machine before his first title defense. Still, it had been enough to make the monster of a man recoil in pain, as he’d stepped back holding his cheek.

“I d-don’t need it.” Nelson stutters, looking at the ground.

It wasn’t like there was anything magical about a beaten up leather mask. He didn’t find it at some enchanted flea market on an Indian burial ground. But somehow, when he put that mask on his face, Nelson Jones melted away into the ether… he wasn’t just a man in a mask.

“…alright then, I guess.” Gunner rolls his eyes, already exasperated. “Well, if you can’t take a punch, then throw one. Hit me.”

The Indy legend squares up his feet, puffing out his chest as he prepares to take one quite literally on the chin. Knight is a ringer— a long time vet of the game, more likely to be seen in the gym working guys out than he is to be wrestling on television. Even still, with everything he owes to James Cornfield, he’s exasperated with this. He signed up to train GenoSyde.

He got Nelson Jones.

The large but awkward wrestler rears back, balling his fist awkwardly as he takes a swing at Gunner. He does manage to connect, but it’s a glancing blow. The kind that you see in front of a bar, from a drunk who barely knows how to fight in the first place. Worse, he overextends— his front foot wobbles instead of planting, forcing him to almost comically spin sideways in the follow through.

“Nelson.” Gunner rubs his temples, holding back a migraine. “There isn’t a nice way to say it, bud. Mask is the star of the show. You can’t fucking fight. You’re a fat tub of shit with a motor skills of a Seven Eleven hotdog.”

He shakes his head, grabbing a bottle of water off the nearby bench and tossing a towel to his training partner. Nelson barely catches it, wiping the absolutely dripping sweat from his hair and brow. They’ve been at this all afternoon, with very little progress.

With a big sigh, the HOTv champion collapses onto the bench, dropping his elbows onto his knees as he stares at the floor. His whole life, he’d dreamed of being a professional wrestler, and for fourteen years, he’d been doing just that… sort of.

It was hard to… explain… GenoSyde.

An unstoppable monster in a mask, but an unfathomable dope without it. When he slid that grimy old piece of leather over his face, he became a passenger. A vessel for something else. For fourteen years he’d been watching wrestling in first person, but it was like he wasn’t the one holding the controller. Living his dream, but only as an observer.

It was absolute hell on earth.

He nods his head to no one, no hint of confidence in his voice. Nelson Jones was a loser. He’d always been a loser. A fat kid with bad genes and a speech impediment. He’s never had a girlfriend, a savings account, or a future. But GenoSyde? GenoSyde was a star. A monster. A champion, holding two titles across two companies with a bidding war for his services.

…how does a man become envious of himself?

From his slumped over position on the bench, Nelson slowly draws his eyes to the gear bag on the floor next to him. All of the answers were in that bag… the key to holding on to the HOTv Championship in his first ever title defense. Xander Azula was seen as a goof to some, but not to Nelson Jones. He knew better than to sleep on a man with anger in his heart. What Xander did to Darin Zion wasn’t just a grudge against his old tag partner… it was an expression of pure rage. Rage against a company that has written him off. Rage against a world that hasn’t embraced him as a star. Rage against a career that wasn’t turning out how he’d hoped. Xander Azula was filled with a rage that the world did not yet understand.

He knows what it’s like to be spit on, and made fun of, and come up short at every turn. He remembers the way they laughed, the first time he ever stepped into a ring and made a fool of himself. He knows what happens when the rage builds inside of you, and he knows what it feels like to let it out. His mask wasn’t magic… it was rage.

And Xander Azula has found his mask.

“Fuck it.” he grunts, reaching for his gear bag.

He reaches gruffly into the duffel, sorting through the gym clothes and pulling the crummy old mask out from the bottom of the bag. It fucking stinks. Reeks of sweat, blood, and stale beer. Of bingo halls and high school gymnasiums. It smells of fear.

He doesn’t notice it, but his voice begins to steady, his stammer vanishing into the air as the mask seems to bore its empty eyes into the back of his skull. His posture seems to lift right alongside his confidence, as his chest slowly begins to heave. The leather pulls over his long, sweat-soaked hair, a tangled mess of roots as he lifts the mask over his head. It’s as though the mask is becoming a part of him, as it falls flush above the bridge of his nose.

“It’s just a mask.” he closes his eyes, strapping in for the ride.

The champion has arrived.

And he is an angry man.