See Ya At War Games

I don’t know how I’m going to get Dan’s big head on my tights, but I will.

Darin Zion is a Troyjan Horse 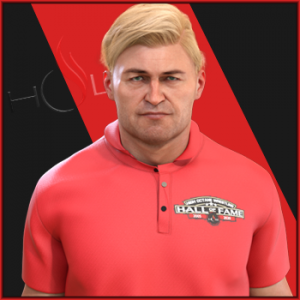 Steve, another shot at my weight?  I’m a “friend” of the North American Marlon Brando Look Alikes?  That’s, at least, what I am choosing to believe.  Because if that’s NOT what you meant, then you are truly a vile, reprehensible human being.

I could go on and discuss the fact that StarrSek Industries is a waste management company and how our Sektor-Jatt Starr Best Friends plush sold out within hours of becoming available for purchase.  I could agree that this HOFC match of ours has less to do with revenge and more to do with you seeking redemption.

But I think so little of you right now, that I’m just going to read some dialogue from my untitled sci-fi epic screenplay.

DETECTIVE BRANNIGAN O’SEXCHAP:  Colonel, why am I here?

COLONEL BRAXTON VEX:  You might be a streetwise cop with no regard for the rules, but dammit!  You’re the best shot this country, no, this world has got!

COL. VEX:  Your captain told me about your suspension.

BRANNIGAN:  Screw that bureaucratic fopdoodle.  Why me?

COL. VEX:  I think it’s best to hear it from Professor Watson.   Professor?

PROFESSOR VANDERMEAL:  Yes, Detective, we are about to be invaded by aliens.

BRANNIGAN:  Human trafficking?  Who is it?  The Russians?  Columbian Cartel?

BRANNIGAN:  I believe in three things – My Desert Eagle, Johnnie Walker, and the third ain’t extraterrestrials.

PROF. VANDERMEAL:  We are dealing with a race of beings known as the Stevarricles!  They have begun by poisoning our water and milk supply.

COL. VEX:  They have infiltrated the milk and bottled water industry.  Those sorry bastards that have drank their product have been suffering from some alien—

COL. VEX:  There have been thirty-two confirmed deaths.

BRANNIGAN:  How do you know it’s alien?

COL. VEX:  These aliens are grotesque shapeshifting monsters.  Their shit is clear and they defecate from their fingertips and insert it in the milk and water at the factories in which they work.

BRANNIGAN:  Commie alien bastards!  What can I do?

COL. VEX:  it’s clear to us, that after an extensive background check, you have slept with two hundred and eighty plus women and every blood test came back negative for sexually transmitted diseases.

BRANNIGAN:  What can I say?  The ladies love me.

PROF. VANDERMEAL:  In fact, we have checked it seems you are immune to many diseases.

COL. VEX:  Which is why, you might be the only son of a bitch who can get close to these sons of bitches and take them down.

BRANNIGAN:  For America, you can count me in.  But I bring in my own team.

BRANNIGAN:  I’ll want Jace Hardcastle, demolitions expert out of Akron.  Damian Pluto, master of disguise, he’s currently stationed in Fort Bragg.  And the most important member of the team, Bobbi Jo Sweetlips, her bazookas are out of this world, and I’m not talking about artillery.  She’s just brought down a drug ring at Vegas strip club.

PROF. VANDERMEAL:  Mendoza?  That was her?

BRANNIGAN:  Oh yeah.  She took down eight of those bastards with her bare breasts.

COL. VEX:  We will bring in anyone you want, but we need to move fast.

BRANNIGAN:  When do I start?

You know, reading this out loud, I realize something.  It’s brilliant.

I know, Steve.  You’re sitting there, your poophole is just burning, knowing that this is just another skill that the Ruler of Jattlantis has bested you in.  But I don’t give a rat’s rectum what you think.

Mongo only pawn in game of life.

B) If I’m gonna get busted, it is not gonna be by a guy like that

Not Exactly a Peter Fonda Film….

It’s just a jump to the left….

There’s lint in my pocket