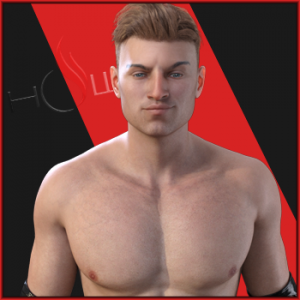 The rabid crowd rises to their feet; their voices roaring with excitement.  As the action continues to occur in the ring, I observe JPD leaving the ring.  While the room spins around me, I muster up all the strength I can.  While everything’s still fuzzy, I mutter underneath my breath.

Too late!  The lights gleam off the top of Scottywood’s cueball shaped head.  I can’t let that bastard reach Bobbinette or Cece Farthypants.  He’ll ruin MY opportunity!  It’s REAL LOVE’s night to make an impact.  Without a single moment of hesitation, I reach and latch onto Scotter’s legs.  The cameras grab a quick glance, but they don’t catch me yanking Woodson back out of the ring.  I launch him with all the force in the world.  He collides with the cold, unforgiving steel steps.  I’m inches away from winning this…

Bryan McVay’s rigid voice echoes through my head while I fold my arms at my side.  I observe out of the corner of my eyes Bergman’s arm extending into the air.  The crowd come unglue watching Bergman and I punch our ticket to gold.  But I couldn’t help it.   As the cameras flashed in my face, my head sags down towards the ground.  Resting my hands against my waste, a frown appears over my face.  A shade of beat red takes over my complexion while I head towards the backstage area.

A couple hours pass…and my disposition still hasn’t changed.  My stomach churns while the veins in my forehead protrude out of my skull.  I’d sat back calmly in my locker room for the past few hours, hoping everything would come into perspective.  But let’s face it; The Plain Jane of HOW stole REAL LOVE’S opportunity.  That divorcee denied all the D.Z. fans TRUE LOVE.  All so that selfish cunt could have his moment in the sunlight.

I couldn’t let that cunt sit back and Bergman steal my spotlight.   Stomping back through the halls of the USS High Octane, I comb through the sea of producers.  All of them dawn the black and #97Red collared shirts.  As I passed the first few rows of these peons, I tap each one of them on the back.  I utter my words out in a calm demeanor.

Each one of them shrug their shoulders as I go down the line.  Each of their beady eyes and sweaty palms tell me a different story.  None of them look me in the eye while I continue down the row.  I exhale an exaggerated sigh before turning the corner.

Down the second line I went, begging them all the same question.  This time, my voice became more pointed, almost shouting out loud.

“WHERE IS JOE BERGMAN?!”

Their perplexed looks and clammy expressions continue to annoy me.  I could feel the urge to punch their pathetic faces in swell while I continued.  I could only stand with my arms folded against my chest, rolling my eyes.  Another few rows…the same exhausted fucking answers.

Finally, I turned down the last row of the production hallways.  The last three minions sat around the buttons and knobs, looking like a bunch of fools.  Marching up behind the only one with a headset, I didn’t hold back.  I latched my fists around his collar.  Picking him up out of the chair, I slam him against the old rusty pipes behind him.  I waste no time smashing his face against the rusted walls of Lee’s prized ship.

After forcing the poor bloke to inhale some fumes from the exhaust wafting behind him, I pull this dude straight up to my face.  His eyes connect with mine.  This production crew member could feel my projectile spit splattering him in the face.  The warm air from my nostrils caused the hairs on his neck to rise up.  My neck twists and turns while my blood shot eyes widen.  My face radiates heat as I pull him closer.  I could feel him flailing around, trying to escape my wrath.

“I’ve spent the last half hour going up and down the ranks of your pathetic crew.  Now I don’t care Number 979,797 what your fuckin’ sob story is.  I’ve spent the last three hours trying to get tonight’s win out of my head.  I know, I should be fuckin’ grateful I’m a contender to a championship belt in HOW.  I can finally give myself the pat on the back and validate myself.  Took a damn long time to give myself from self-love.  But I’m not satisfied with that shit.  Do you know what happened to me?”

The Production leader tries chiming in, but I extend my hand straight into to his.  His eye bulge out while I continue to rant on with passion.

“The Bergermeister denied the millions of Zillennials the opportunity to experience TRUE, REAL LOVE.  That bastard lusted over his former Tag Team Partner’s glories.  Typical fuckin’ Joe Bergman, am I right?  Always looking for ways to hoard all the gold for himself.  It’s no wonder why Laura Bergman decided to dump his ass on the curb.  It’s clearly because Mr. Bergermeister thinks he’s earned everything he’s got.   The man always does the humble brag.  He’s a former HOW World Champion and former Tag Champion.  The more gold he wins…well the more ‘Gold’ he earns.  And let’s face it, he couldn’t let Laura upstage his career ever.”

I drop the man off the wall before I continue my point pacing around like a frantic maniac.

“Well he did that to me tonight.  He STOOOOOLE my pin attempt.  I told him it’s my night to prove my worth.  If Joe could have waited 15 more seconds and tagged me in….I would have ended the Hall of Fame career of Cecilworth Farthington.  I coulda snapped his arm straight out of the socket.  It would have aligned the 4Z network’s greatly.  But that fucker stormed right in and stole all the money out of my bank account.  I know how Laura feels now…”

I brush off the man’s collar before rolling my eyes into the air.

“So you can clearly fuckin’ see…I ain’t got the time for this shit!  I’ve patiently searched for Halitosis all night.  I’m only gonna ask you once.  WHERE THE FUCK DID BERGMAN GO?!  Because I swear to GOD himself…I’ll kick all your asses on by one until….”

A small faint voice echoes off in the distance.   A quieter member of the staff responds back to me. “He hopped on a plane to head back to Missouri.  HOW officials got him out of here rather quickly tonight.  Had something to do with his other obligations.”

I stomp up to the random short person.  I reach over and pull them close to my face.  “Then you relay to Bergman this message when you see him.  Tell him to tune into my match with Jatt Starr next week.  I’m gonna send him a clear message.  You steal my pin again, and you’ll have quite the identity crisis yourself.”

I’ve got a lot of respect for you investing the last few months into my career.  I could spend a lot of time kissing your ass in front of all the boys for the public to see.  But this is HOW…and we ain’t got time for some sappy shit or dick sucking contest this week.   I’m cutting the chase.

It’s time for you to drop this Sparrow Academy bullshit.  We get it, you’re going through a midlife crisis about your relationship with the Best Family.  It’s some different time bullshit.  No one’s got time for figuring out your dementia and CTE bullshit.  This week, it’s time for the student to stand up to the teacher and make a bold ass statement.

And here’s my statement to you.  You’re stepping into a fuckin’ professional wrestling ring.  Take all your fables, bedtime stories, and tall tales and close that chapter.  You can spend all your time and energy writing vivid legends to tickle the fans fancies.  But you’re stepping into the ring with someone who doesn’t give a shit about fairy tales.  I deal in absolutes.  If you try to put my ass to sleep with your grand, fictional journeys; I will make you pass out to the Love Hold in 30 seconds flat.

This week, I’m on a mission to prove I’m not the dead weight in my tag team.  I can hear all my Z-Mobile subscribers groaning out in pain.  After The Bergermeister stole their opportunity to watch me shine; it made the entire world’s hearts break.  Now as a man who loves; I can’t let my fellow fans shrill out in pain.  It’s been a long week where they’ve all sat on this pain…MY PAIN.

They’ve been denied their doses of love.  I can’t let you take the Love Convoy’s chance to fill their hearts up again with delight.  This is my chance to beat a Hall of Famer with my own talents.  I don’t need someone like Joe Bergman or Jatt Starr holding me up anymore.  It’s my time to show myself some ADORAZION.

This week, you shut up, strap on…and put up your fights.  You’re stepping into REAL LOVE’S opportunity.  It’s my chance to rain the affections of Zion onto all my fellow AMZ subscribers.  It’s my chance to chalk up another win to become the future HOW World Champion.  It’s my opportunity and blessing to build my brand heading into the HOW Tag Team Championship match in the future.

So I’m not here to waste a bunch of time like you’ve done over the past few months.  Let’s get real here, Jatt.  While you spent time spinning stories; you’ve built yourself quite a losing streak.  Keeping your head in the clouds; you’ve become soft.  You lost that edge like Tyler Best told you.  Hell, you’ve become a shell of the man formerly known as Jatt Starr.

If you come at me like that…you’re dead.  Just like John Sektor.  I’ll end you on the spot if you forget who the hell you are.  So step into my ring.  It’s time I show you and the rest of the world some love.  It’s time for you to become another victim of real love.”