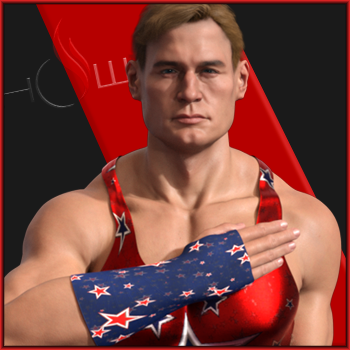 ``The Greatest American`` by Cracked Prism

“The Greatest American” by Cracked Prism Studios hits as the crowd erupt into a chorus of boos.

Christopher America makes his way out through the curtain. He emphatically bows his head and places his hand over his heart. He then looks up and holds his hands apart as red, white, and blue Pyro go off.

America walks down the ramp, ignoring the fans reaching out to touch him. He climbs the steps, gets into the ring, and moves to the center. He stands at attention, places his hand over his heart, smirks, and raises his other hand as he looks towards his opponent.

Short Bio including Personality: Christopher America is the personification of America. Often dubbed the second best wrestling mind in HOW, America’s brilliance lies in his ability to foresee what is to come. If you cross America, you’ll see the true brutality that America is known for.

The Weight Of The Moment

Ghost of America’s Present: Am I Meant For This?

Ghost of America’s Past: Monster