The following video has been submitted to High Octane Wrestling in advance of this week’s episode of Saturday Night Refueled. 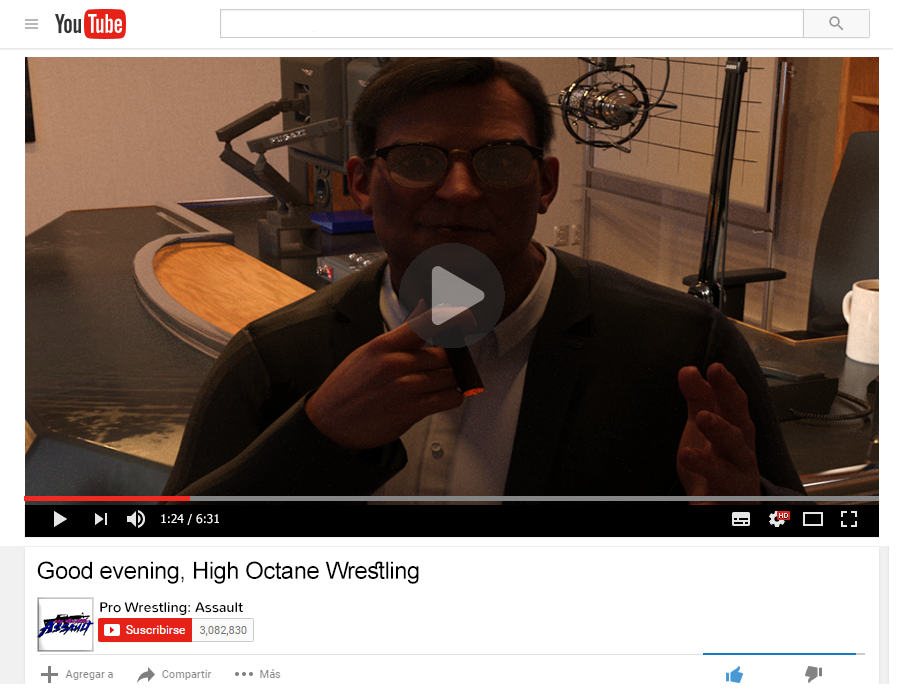 As soon as you click play, you’re tempted to check your internet connection. Don’t bother… your speed is fine. The not-quite-HD video begins with subpar lighting and less than professional quality, as a middle aged main stands in the center of the shot with a cigar hanging between his fingers. He’s soft in the center and hard in the face, as he looks into the camera with the forced kind of smile you’d recognize on a salesman at a car dealership.

The smoke billows out of his face toward the lens of the camera, as he crosses his arms in front of his body.

Promotor: I know you’re staring at your computer screens right now and you’re wondering just who on earth this old man is and why he’s wasting your time, so allow me to introduce myself. My name is James Cornfield, and I am the owner, booker, and sole proprietor of a company called Pro Wrestling: Assault. Now the lineage of professional wrestling ain’t something that too many people seem to give a hoot n’ hell about these days, so there’s a good chance that you’re watching me, and you’re saying “Jimmy, now what has that got to do with me?” Well, I’ll tell you right now what that’s got to do with you, and I thank you for asking, because in addition to being an owner, a booker, and a sole proprietor… I also represent the next World Tag Team Champions of High Octane Wrestling.

The camera never zooms out or pans away, just a still shot of the a middle aged man with the beginnings of flop sweat on his forehead and an ever-burning cigar. He looks like a man who has lived a lot of places and seen a lot of things, and the machine gun-like quality of his voice makes it easy to keep listening.

James Cornfield: Now you may not know my face and you may not know my name, and hell, that’s alright. Why would you? I’m a wrestling promotor. I run wrestling events at a wrestling company. At my shows, you see wrestling. We don’t use racial slurs on our weekly podcast. We don’t have our own SWAT team on staff because we don’t know how to keep control over our own mudshow bullcrap television show. And I’ll tell you what, no one is committing felony murder over in Pro Wrestling: Assault. I think it’s about time that wrestling became about wrestling again, and that’s why when I heard that the Maurako Cup had an opening for one more team, I couldn’t pass up on the opportunity to come in and here and show the world something they haven’t seen in HOW in a very long time…. wrestling.

Mr. Cornfield stares directly into the center of the camera, his eyes focused and intent. There is clearly anger in his voice, though the reason behind it isn’t quite clear yet.

James Cornfield: I hear there’s a fella over there in HOW named John Sektor, and him and his little protégé Adam Ellis actually like to wrestle. I gotta tell you, my boys can’t wait to get into the ring with the HOW LSD Champion and his young ward, and I can’t wait to introduce you to them. Mr. Sektor… Mr. Ellis… you might not know the name of our PWA World Champion, Ivy English, but let me tell you that after Saturday Night Refueled, you sure will. And you might not know the face of the man called GenoSyde, but I can assure you that on Saturday night, it’s an image that you’re never going to forget. Pro Wrestling: Assault is here to compete, we are here to win, and most of all, we are here to wrestle.

He stubs the end of his cigar out in the ashtray on his desk, crossing his arms as he smiles that cheesy carny smile into the camera.

James Cornfield: We’ll see you boys on Saturday night. Hope you’re ready for a heck of a fight.

The video comes to an end.