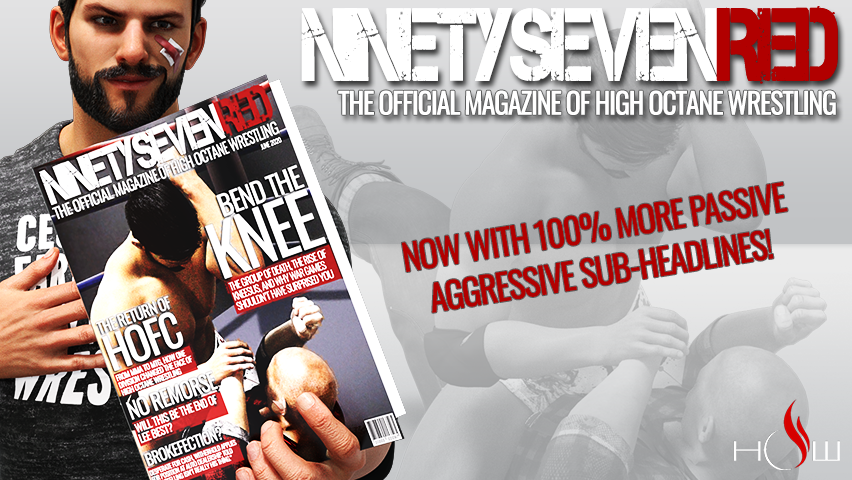 With Refueled XXXIV officially in the rearview mirror, it would seem this week’s show created more questions than it answered for the No Remorse pay-per-view, which is now a mere two shows away.

Over the last two days, HOWrestling.com has reported on the injuries sustained by the ICON Champion at the hands of a ravenous Dan Ryan, shining uncertainty on the scheduled championship match between them at No Remorse. With Eric Dane possibly on the sidelines after a vicious attack by Lindsay Troy, and the abrupt exit of MJ Flair from High Octane Wrestling following a match with Cecilworth Farthington, it would seem that the Group of Death has seemingly thrown the proverbial monkey wrench into the gears of HOW’s fledgling pay-per-view.

Perhaps most mysterious, however, was the absence from The Minister on the last edition of Refueled. Last week, HOWrestling.com published a story entitled “Minister Plans Big Reveal”, in which the Minister threatened to “reveal Mike Best’s greatest secret”. After boasting that he had spent weeks scouring the country for dirt on the HOW World Champion, the Minister urged fans to tune in to Refueled XXXIV, where he promised that Michael Best would be “exposed for his crippling shortcomings.”

But Minister was nowhere to be found at Refueled XXXIV. Sources confirm that not only did Kael not make an on-camera appearance at the show, but was not even present at the arena. Fans have waited in eager anticipation for the HOW Hall of Famer to break his silence, there is one man who told HOWrestling.com that just isn’t that interested– HOW World Champion Mike Best.

Joining the team for a rare sit down interview, Michael sat in an oversized office chair in a way that he insisted we refer to as “Indian Style” if we wanted the rights to print the story. Please note that this, and all other comments made by the HOW World Champion, are not a reflection of the HOWrestling.com team, the network, or the company as a whole.

Interviewer: Thank you for joining us today! You don’t generally do format style interviews, so it’s a pleasure to have you.

Mike Best: No it isn’t. I read the fucking website. The only thing I hate more than blatant disrespect is boot licking. But don’t worry… the champion is probably just being facetious, am I right?

Interviewer: Well, let’s just get started then. We’re just two shows away from No Remorse, the very first pay-per-view of its name, and yet a great deal of the show seems to be in flux. What are your thoughts on the events of the last few weeks, especially considering that it’s public knowledge that No Remorse was your brainchild?

Mike Best: Card subject to change, dickhead. You think I’m gonna tell you I’m disappointed that Dan Ryan did a literal murrdur— print that with a U and two Rs, by the way— and fucked up an ICON Title match? You think I’m sad that my best friend smashed MJ Flair so hard with a chair that she isn’t a wrestler anymore? We’re not called the Group of Talk. And besides, that shit isn’t my problem anymore— all I did was name the fucking thing. Lee can figure out the rest. We aren’t partners anymore, after all– I sold my stakes back in March.

Interviewer: Well, before we make it to No Remorse, it’s been announced by Lee Best that the first roster review of the new era will take place this week. With Best Best right around the corner, any concerns about what your father might have to say about you in particular? Especially with rumors running rampant that you’ve become a problem backstage, and are allegedly running people out of the company left and right?

Mike Best: Stupid question. If you think I’m not standing on the apron during a Best Bets and waiting for the tag, you’re dumb as fuck. Trust me, we both have a lot of say to these thin-skinned motherfuckers. It’s time some of them learned about this playground they’re playing in, because my Dad has been coddling a lot of these soft-heads for nearly two years now and recess is over. And in case you needed any other incentive to tune in, there’s going to be one more HOW World Championship match before No Remorse, and Lee Best is going to reveal that challenger live during Best Bets.

Interviewer: …a championship match on the Go Home show, two weeks before you’re slated to face Max Kael at No Remorse? Doesn’t that seem unwise?

Interviewer: Apologies. The Minister. What about the HOW World Championship match scheduled between the two of you?

Mike Best: What about it? I booked my plane ticket for Tampa. I’ll be there. I assume he’ll be there too. Boy, sure can’t wait for the spooky Home Alone match against the hottest act of 2009.

Interviewer: That’s not traditionally the way you’d approach a match with someone like Max Kael— care to elaborate?

Interviewer: But once again, traditionally speaking, isn’t that a taller order? Isn’t the Minister historically a much tougher challenger, a much more dangerous threat, and a much more unpredictable opponent?

Mike Best: Yeah look, man, if you’ve got a bunch of Minister questions, I’m not that interested. Ask me about the book. Ask me about No Remorse. Ask me about how Lindsay Troy double fisted Eric Dane like two Natty Lites at a frat party on Saturday night. All much more interesting topics than a washed up Freddie Krueger from the early aughts.

Interviewer: Indulge me one more. Last week, the Minister released news to the team that he was planning to expose your “darkest secret” live on Refueled XXXIV. Do you know what kept him from the show? And perhaps more importantly, do you have any idea what exactly he’s planning to reveal?

Mike Best: Literally couldn’t care less. Look, Brian, If you’re asking me why a man who constantly makes promises he can’t keep didn’t keep a promise this week, I don’t know what to tell you. He’s pinned me one time in ten years. I stopped counting my victories over this motherfucker when I hit double digits, because who even gives a shit. Maybe he dipped back out to the Spirit store to stock up on stupid masks again. Maybe he went back to whatever country will help him finish becoming Robocop. Or maybe he just wised up and ran back to his little made up hometown with his tail between his legs. Who actually gives a shit? If he shows up in Tampa, I’m gonna fucking destroy a frail old man and that’s gonna be the end of it.

Interviewer: Max Kael has dominated the roster and been the number one ranked wrestler for almost the entire new era of–

Mike Best: Yeah, Max Kael. Not the fucking Minister. Do you know what makes Max Kael a fucking murderer? It isn’t what he doesn’t give a fuck about, it’s what he does give a fuck about. Max Kael is dangerous. Max Kael is my brother. Max Kael is someone I respect. The Minister is just another cheap hack religious gimmick being spouted off by a guy who would be begging for change and telling you the end was near, if Max Kael hadn’t made him famous. This whole Nihilism Apocalypse shit doesn’t phase me in the slightest. OOOOOOH HE DOESN’T CARE ABOUT AAAAAAANYTHING. So spooky. So edgy. Max Kael could give me the match of the year. The Minister had one job at War Games, and instead he stabbed me in the cheek and laid on the ground like a broken, shitty old man. Because that’s all he is.

Interviewer: So you aren’t concerned about whatever he’s dug up about your past?

Mike Best: Fuck no.That’s the problem with the Minister. His whole spooky doom bullshit… I’m immune to it. I don’t keep secrets. I don’t have skeletons in my closet. You can’t scare the Nine Time Champion with blackmail and the mannequins of primadonnas with shitty attitudes. What’s he gonna find, Brian? Is he gonna tell the world that I once ran a church sponsored abortion clinic? Is he gonna find out about my history of sexual assault charges? Maybe he’s gonna tell everyone that I drove around Europe with a dead body in my trunk for a month and a half back in 2010, and that I got a handjob from a transgender woman in a Japanese massage parlor in 2012. I DID THAT SHIT ON TELEVISION, FUCK FACE. ALL OF IT. I wear my transgressions on my sleeve and I bare them all for the world to see.

Interviewer: Once again, I need to remind everyone that the thoughts and opinions expressed by–

Mike Best: Oh Jesus, shut the fuck up. This is HOW. People die here. This isn’t fucking wrasslin’, no matter how badly the big fish from all the other ponds want it to be. We have a pay-per-view from a fucking prison and people are gonna get shanked in guard towers. I don’t really give a fuck if they cancel me, because I’m cancelproof. Bunch of thinned skinned motherfuckers can’t handle a few mean words, so they run off to get Coltrane run on them by a bunch of jazz musicians, or fuck off to Defiance and beg like Keith Sweat for a title shot. Go put a headlock on another mouth breather and do a four hour podcast about all the titles you won in 2008. Personally, I’m enjoying being the top motherfucker in pro wrestling in 2020, un-fucking-disputed.

Interviewer: Well then… I think it’s wise to say that’s about all the time we have for today. Anything else you’d like to promote before we go?

“I KNEED JESUS” is available now on the HOAX.